Continuing on the epic roadtrip with our third stop being Mount Maunganui we headed southeast and made our way through rolling green hills and stopped for lunch in a beautiful oasis. New Zealand is so tranquil – everything about it. I was in a constant state of awe and admiration. I had been to the Mount once before and fell in love, nothing changed the second time around. I managed to get a quick surf in on Lauren Hill’s beautiful log, and her fun single fin. We went out for dinner to Astrolabe which was a funky bar that had all the different types of Mac’s beer on tap; albeit I had to opt for a cocktail. It was my birthday after all! After full bellies and lots of laughs we meandered home ready for another day of exploration. 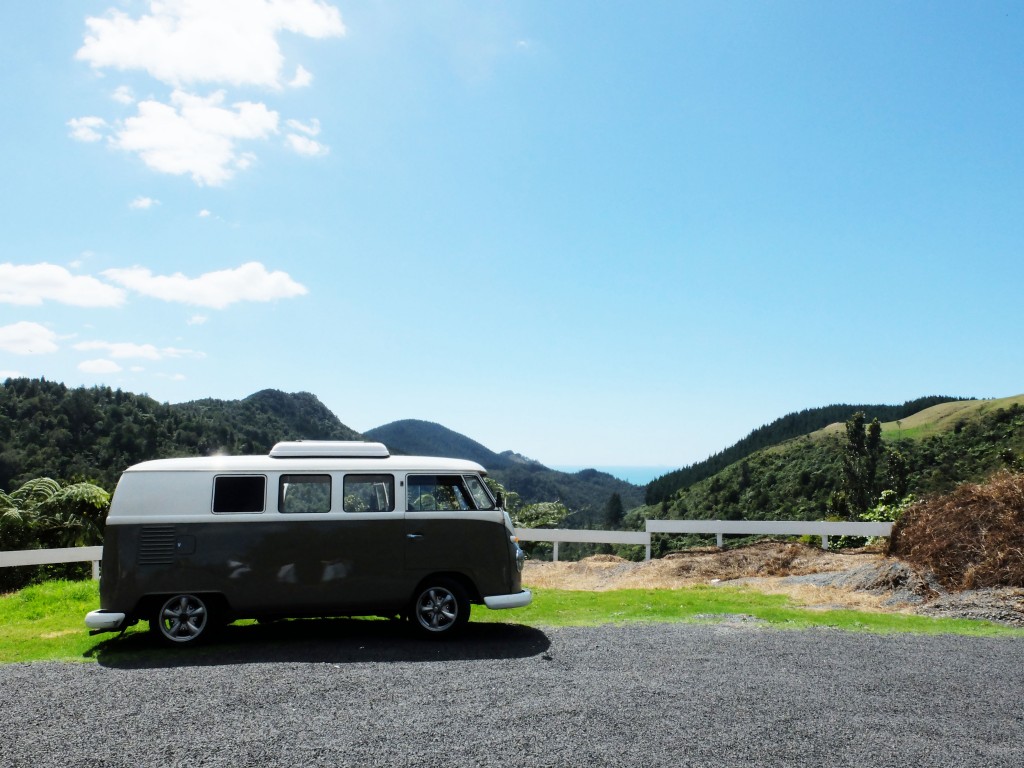 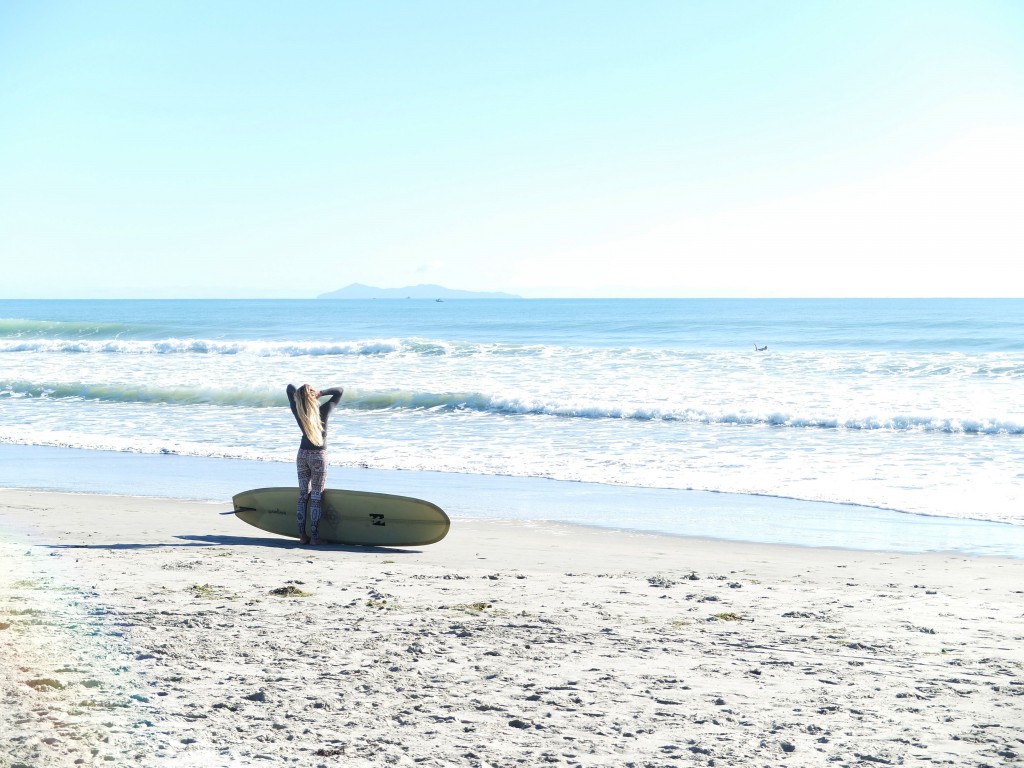 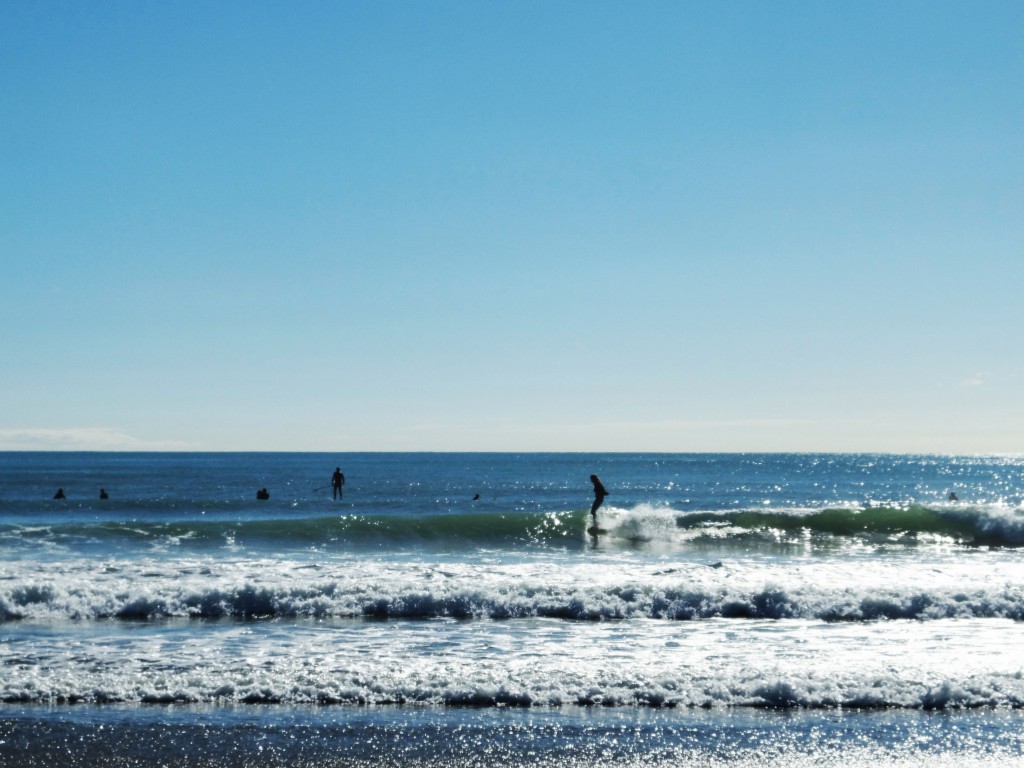 The next morning we decided to climb the towns namesake; Mount Maunganui. It was so spectacular and it definitely got the legs burning! It felt so good to get some exercise in before another few hours cooped up in Ernest. 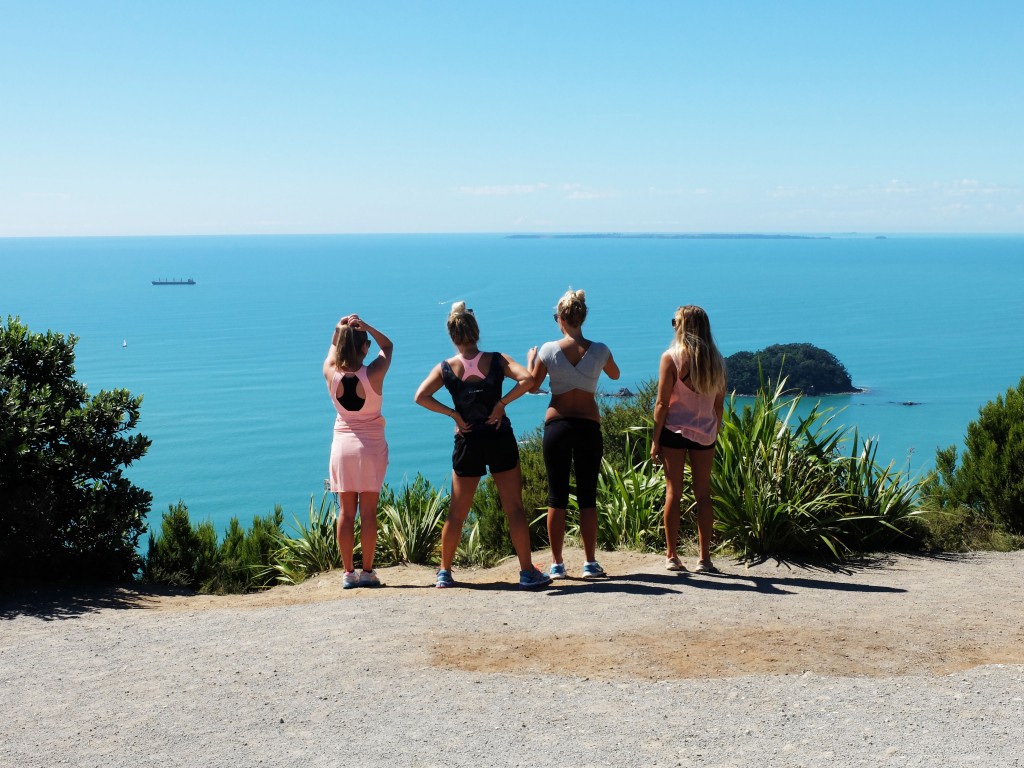 4th Stop Rotorua: The girls smelt the destination before they saw it. First time in Rotorua and I won’t forget it. We arrived late so got ready in a flash for our night at the Mitai Maori Village. Our host was exceptionally funny and could speak numerous languages to the diverse room seated before him. While our hangi was cooking we wandered through the forest and learnt about native fauna and the iconic silver fern, saw some incredibly large weta insects, watched warriors in traditional dress paddle down the stream in a waka (ancient warrior canoe), and marveled at glow worms in their natural habitat. The Fairy Spring was incredible; the clearest water I’ve ever seen bubbling up from the Earth’s surface with trout and eels swimming around. We were also treated to a cultural performance and learnt about Maori past, carvings, tattoo art, weaponry and combat with a finale of the poi and intense haka war dance. The chief was very easy on the eye so made for an even better performance! This stuff wasn’t new to me as we grew up learning about the Maori culture, but I did feel incredibly proud to come from a country with such a rich past. The Hangi was delicious, such a beautiful smokey taste and boy did it feel good to eat real Kumara again, none of this Australian sweet potatoe nonsense. 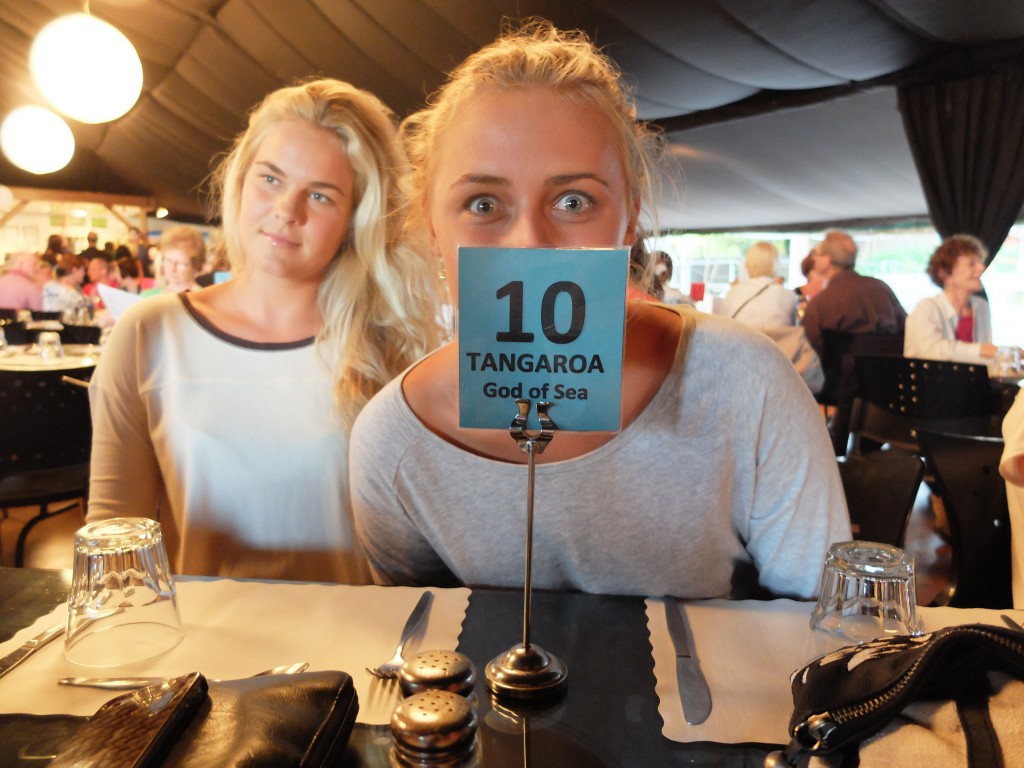 We spent the morning exploring the outskirts of Rotorua; including the Redwood forest, Lake Tikitapu also known as Blue Lake and the beautiful Lake Rotoiti that has plenty of cute jetties jutting out into the water. 5th Stop Ohope: Ernest was getting as tired as I was driving and so he decided to put his way into the driveway of our next abode and go no further so we left him to rest for the night. Ohope sits on 11km of white sand in the Eastern Bay of Plenty and has been voted New Zealand’s most loved beach. We stayed at the Ohope Beach Resort and had the penthouse apartment….wowee! With 360 degree views of the harbour and the Pacific Ocean we were blessed with a mouth-dropping sunset. Fish n chips out of the newspaper with Watties tomatoe sauce was a huge highlight for me which brought back so many childhood memories of Friday night fish n chips with the family. 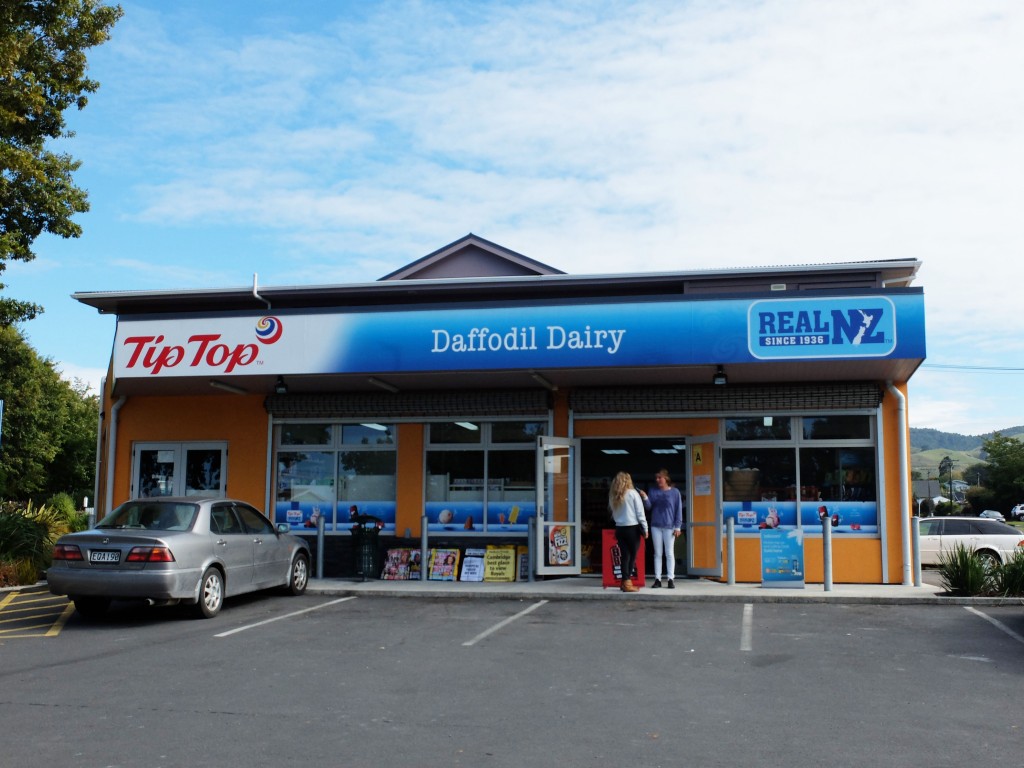 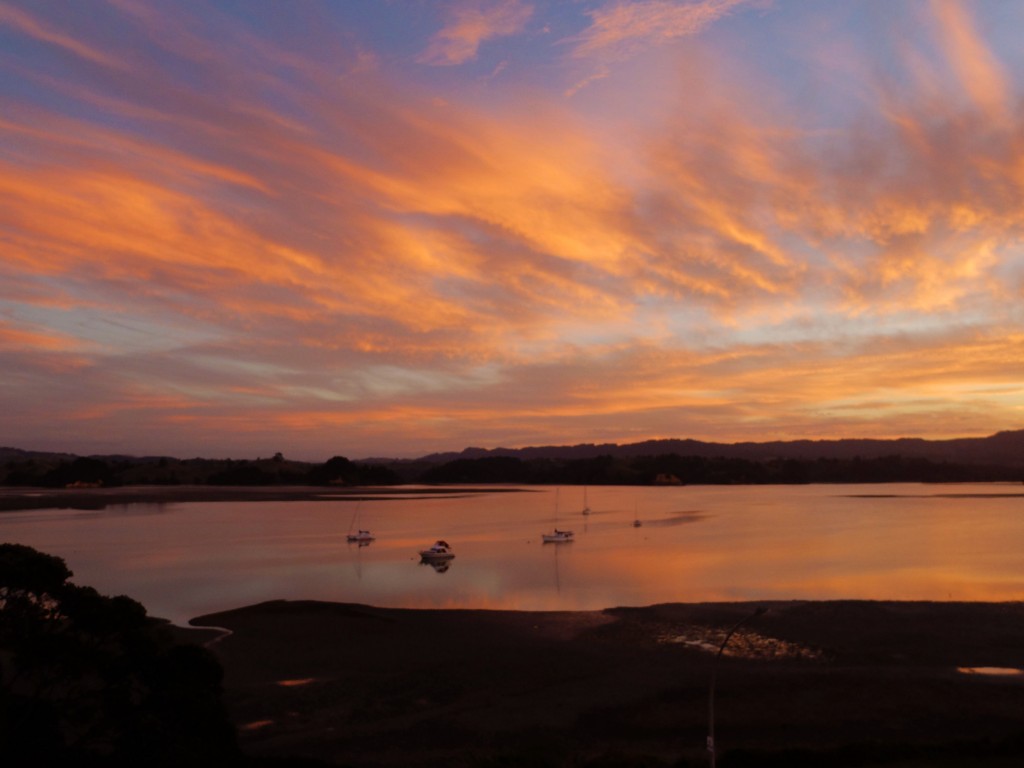 The next morning Ernest took a while to get going, but once he did we all cruised into Whakatane for breakfast and to check the surf. Alas, we did not get very far; Ernest had well and truly had enough. An afternoon spent waiting at the mechanics, Gisborne crossed off our itinerary and the girls enjoying the best surf Whakatane had seen for a long time we retreated home and booked in for another night. The trip back to Auckland was the most eventful yet….oil light buzzing the whole way and numerous dairy stops later we made it to the airport in the nick of time. Truly was the trip of a lifetime.

Blissfully unaware of the beauty of NZ